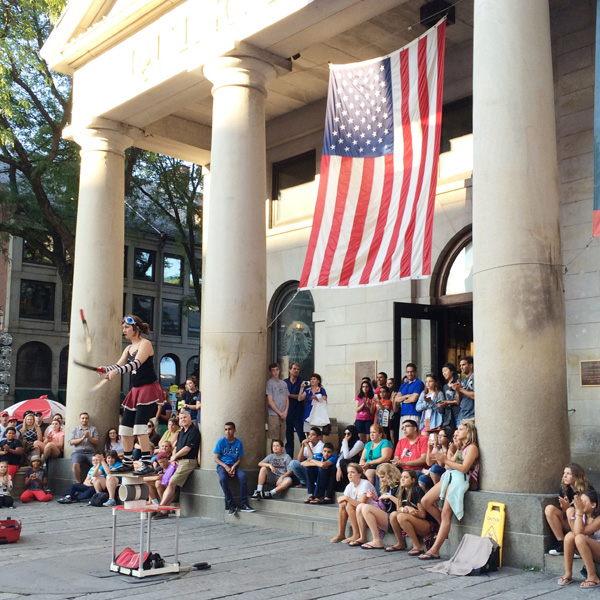 Road trip! Last summer we decided to take a spur-of-the-moment drive up to Boston. We live in southern Connecticut so it’s about a three hour drive. My kids had never been before, and I will admit that they weren’t super excited. Since it was a “surprise” I think they thought that the next words out of our mouths would be, “we’re going to Disney!”, not “we’re going to Boston!”. My husband and I became very animated, telling them about the Freedom Trail and the Aquarium, and Fenway Park. But none of that sold them like the words hotel pool.

Above is the first photo I took in Boston. We walked to Faneuil Hall from our awesome hotel (more about that in a minute) and watched this street performer juggle knives. Faneuil hall is a famous outdoor marketplace that was actually formed as a meeting hall in 1742. One of the coolest things about Boston is all of the history. There are so many times when you can picture men in wigs and waistcoats walking about, tipping their hats and saying, “good morrow to you”. At least, that’s what I was imagining. I’ve discovered that my kids imagine only one thing when they are walking through a city, and that is ice cream. When can they get it and how much can they have. 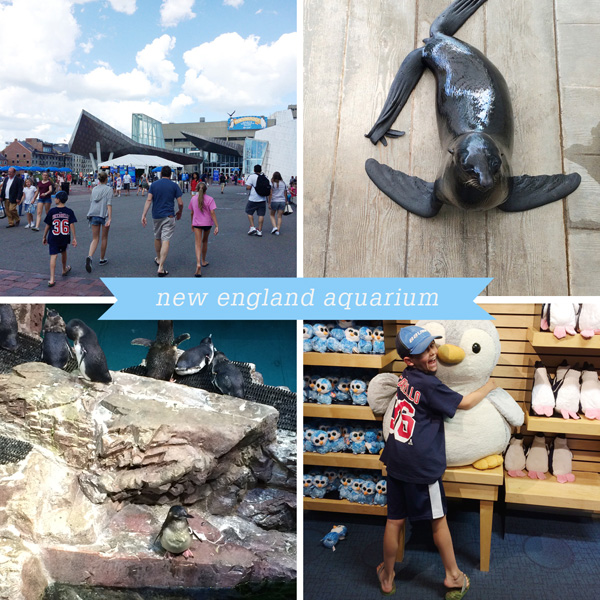 Our next stop on our first day was the New England Aquarium. It was just one block from our hotel which made it super convenient. My son looooves penguins, so we stayed and stared at them for a long time. They were fed, they pooped. It was awesome. We saw the seal show which was cool, but in general it wasn’t the WOW that I was expecting. It was August, so very crowded, and maybe that’s why it was not as amazing as I thought it would be. The food area was closed for some reason, so that was another bummer. I would say that if you are into penguins then definitely go. But we stayed less than two hours. My kids are older, too, so maybe that was a factor (last summer they were 14, 11 and 8). 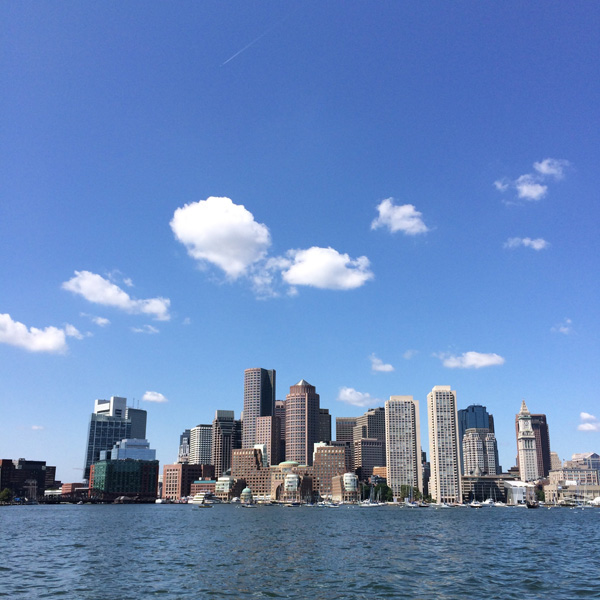 The next morning we woke to the most gorgeous weather imaginable. I call it California weather: 85 and sunny with no humidity (which is a miracle for August in the North East). We decided it was a perfect day to take a ferry to one of the Harbor Islands. There are four islands just a short ride away. We had no idea Boston had islands so this was a miraculous discovery. The only reason we found out is because the harbor cruise boats were docked right next to the aquarium. Lucky us! And one more reason to love our hotel and it’s location on the harbor.

I love the photo I snapped of the Boston skyline from the ferry. 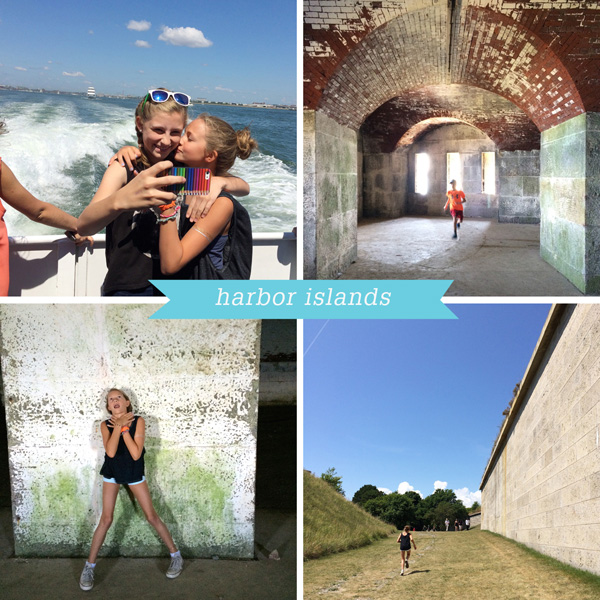 We chose to go and see Fort Warren on Georges Island. It sounded cool and it turned out to be pretty awesome. Fort Warren took almost 30 years to build, with it’s granite archways, and was finished right after the start of the civil war in 1861. It served as a prison for Confederate officers, which definitely made it feel kind of creepy. There were dungeon-like rooms, and long stone corridors. It just seemed like a really cold and miserable place to be. Apparently there is a ghost that lives there called The Lady in Black. This totally freaked my kids out but they loved it at the same time. My son ran around screaming because the echo was incredible. And my middle one pretended she was dying in every room (drama girl). When we finally stepped out of the Fort, it was a huge relief to be outside again. Being inside those cold, stone walls and reading about the men who lived there was such an eye-opener. It gave us a glimpse into life in the “olden days” which was not fun. It made us all feel grateful for our freedom, that’s for sure. 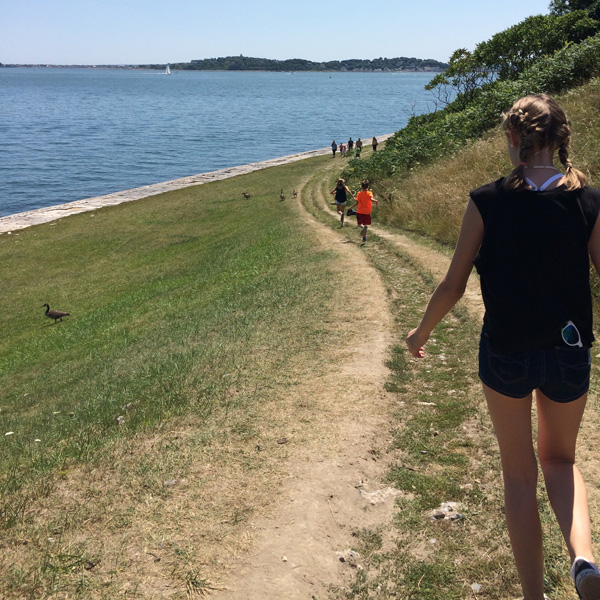 Here the kids are running down the hill after coming out of the Fort. Fresh air!! 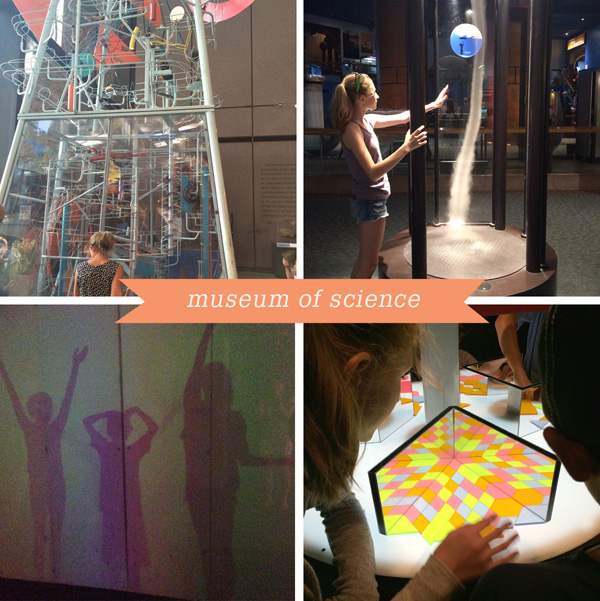 We spent part of the next day at the Museum of Science. This place has so much to offer you really can’t do it all in one day. Here were our favorite things to see and do: 1) the fun mirrors and light room where you could make prints of your shadows on a wall with light — pretty awesome, 2) making tile mosaic patterns with mirrors, 3) the tornado simulator, and 4) the giant Rube Goldberg machine that rose two stories high — we stared at that for an hour! This place is a must visit, but definitely pick and choose before you go or else you might stand in the lobby with the kids fighting for 25 minutes because they all want to do something different. Preparation is your friend. 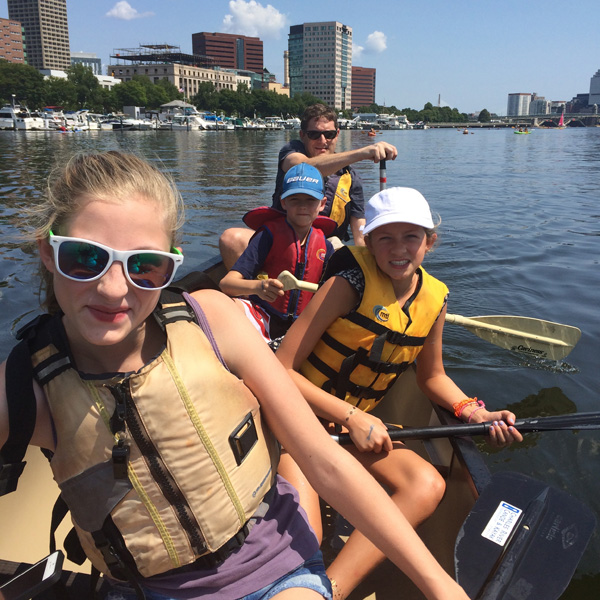 Then we threw in a canoe ride up the Charles River, which might be our best memory. Maybe not at the time, but a year later we still talk about that ride the most. It turns out that five people paddling in a canoe takes teamwork. And in our family there are a few chiefs. The main chief, my husband, thinks of himself as a boatman. Right out of the gate, we paddled into a wall because he was shouting “starboard” and “port” and we had no idea what he was talking about. Was he even talking to us? After a few choice words (that get said in frustration sometimes), and after the chief decided to use normal directions like left and right, we ended up being not bad. Not bad at all. And the memories…there for a lifetime. 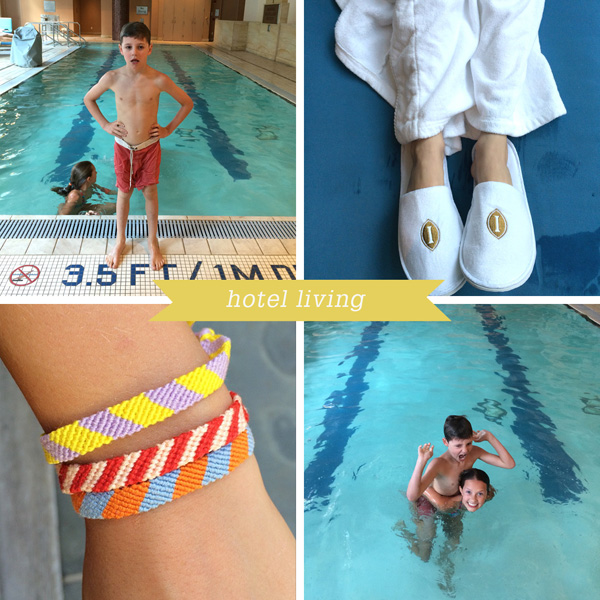 And now the bit about our amazing hotel. We booked our hotel through Priceline. It’s a bidding thing where you put in your dates and where you want to stay (we wanted to be on the Harbor in a 5-star hotel), and then you get-what-you-get and you have to accept whatever you get. But it’s at a really good price, and since we decided to be luxurious for once with a 5-star hotel we knew that anything we got would be good. We ended up at the Intercontinental which was beautiful and perfect. It is located right on the harbor. In fact, the Boston Tea Party boat is right up the path. For some reason we never made it there, or to the Children’s Museum (also just across the way). Next time!

The hotel pool was a huge hit, of course. I would say that every day around noon the kids would start asking when they could go back to the hotel and swim. In fact, we could have never left and they would have been very happy. My son loved his routine of swim / hot shower by the pool / clean white robe /  back upstairs for snacks. It was a king’s life for him! I had to bring one craft (as I always do) and this time we made friendship bracelets while watching movies in bed. Kinda great. 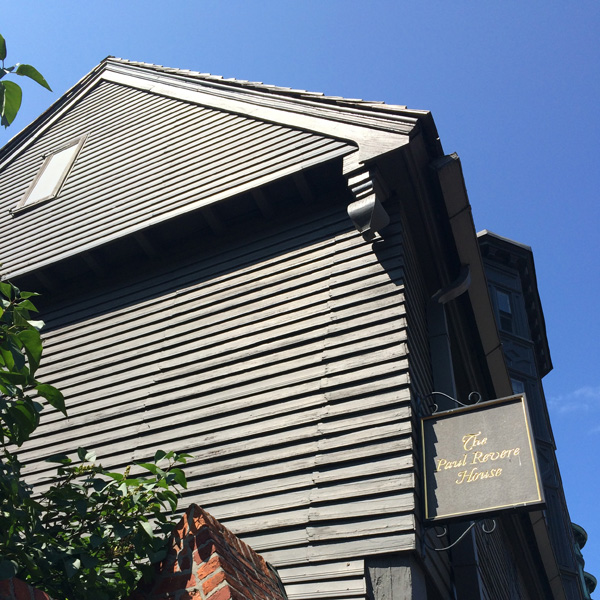 Boston is most famous for it’s Freedom Trail. In the 1950’s Bostonians set out to preserve the story of the American Revolution, as it began in Boston, through the preservation of 16 historically significant sites. These sites are located along a unique 2.5 mile walking trail through the city, marked with a brick line. We didn’t walk the whole trail but did go to Paul Revere’s house which was tiny and awesome. He lived there with his 16 children (whoa!) as a silversmith and part-time dentist making dentures for the townspeople (he was one crafty guy). His famous midnight ride to warn his fellow patriots that “the British are coming” was just one small part of his story. It was really fascinating to step back in time and see how they lived back then.

We also visited the Old North Church where the famous lanterns were hung to warn the patriots that British were advancing across the Charles. Paul Revere had instructed to hang “one if by land, two if by sea”. The church is really beautiful, and we were allowed to sit in the pews which was a win-win for my tired walkers. 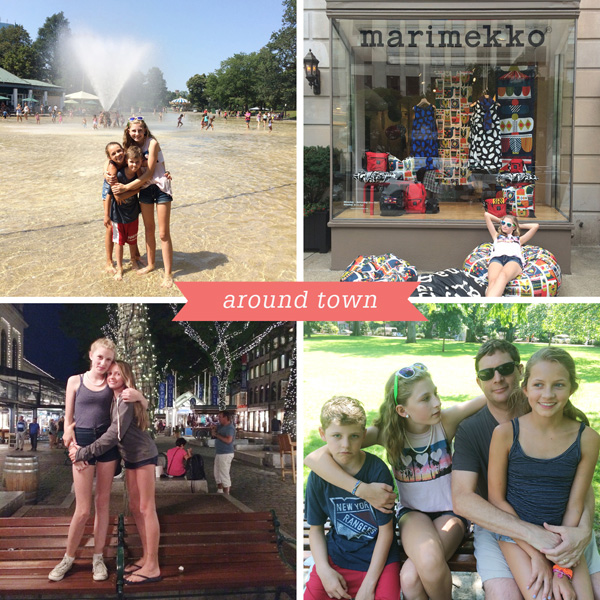 On our last day we took a walk through Boston Commons and came up on Frog Pond Fountain which was perfect! That day was super hot so when we found the fountain and realized the kids could go in for a swim, it was a lifesaver. Then we walked a little further to the Public Garden which has the famous swan boat rides. It was about 95 degrees and there was a very long line, so we decided to just stroll around under shady trees and step around goose poop. (Both the Commons and the Garden were not the cleanest of places, I will admit.) I love the photo of my kids and their dad, I can’t remember why my son looks so glum. Maybe we said no to ice cream.

We then took the subway, called the T, to the famous shopping destination, Newbury Street. We went to the Nike store which is amazing and has this clock that I can’t even explain. Well…here, just look at this clip. Completely mesmerizing. We stopped by Merimekko (my idea), and a few places the girls wanted to go. We had lunch at a really cute place with tables out on the street. Then we took the T back “home” and fell into our routine of pool and snacks.

On the last night we went back to Faneiul Hall and had dinner there at a restaurant I can’t remember. (We just Googled kid-friendly restaurants every day depending on where we were, and then read the menus. It was easy and every meal we had was great.) The coolest part about going there at night was that all of the trees were lit up with lights. And they had this painted piano sitting in the middle of the walkway so any passerby could sit down and play, which they did. It had a really fun, summer vibe (maybe too fun, I remember thinking, as the kids couldn’t stop staring at the passed out drunk teenager on the bench. Woops). 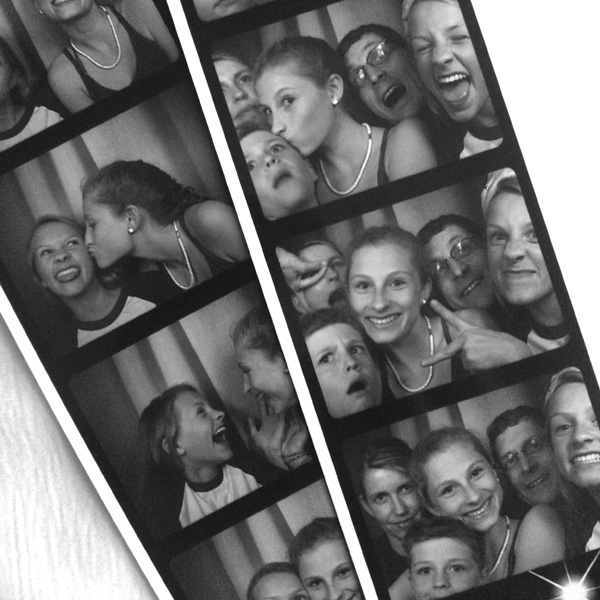 Oh, and we found a photo booth in Quincy Market (one of the buildings in Faneuil Hall) and this is my favorite momento of our trip.

Boston is a very cool town. It is not too big and it is extremely walkable. Plus with all of the college kids around it has a very young, fun vibe. We loved our vacation!

Add any must-see places in the comments that I missed (which I know is many)! 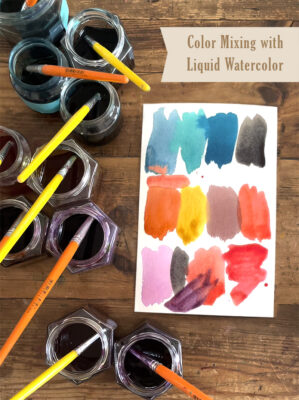