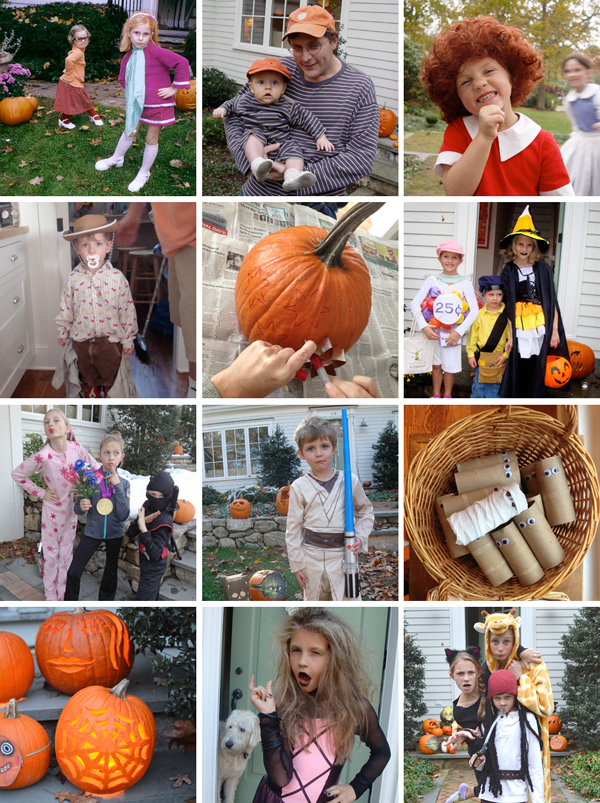 When we celebrate Halloween this Friday, it will be my 14th one since becoming a mom. Every year I moan about it. Do I really have to retrieve that box of junk in the attic with all of the witches and skeletons? Do I really have to drape spider webs over the bushes and scatter the yard with tombstones? How do people even like this holiday? Black and orange aren’t anywhere close to a pretty color combo.

And most tiresome of all…what are my kids going to BE for Halloween?? The conversations start early, like in August when the Halloween catalog appears in the mailbox. But I’ve learned my lesson not to buy (or make) costumes too early. Kids change their minds, don’t they.

The first Halloween with our new baby daughter, I made her a cow costume. The photos are somewhere in an album, taken with a real film camera. I’m pretty sure we stayed at my mom’s during the trick-or-treating hours so that little baby girl could sleep undisturbed by noisy doorbell ringing. Those were the days! No decorations to put up or take down. If not for the little cutie pie cow, it’s like Halloween never happened.

Then she was two, and I don’t remember what she was. At three, her baby sister was born. Again, not sure if we did any trick-or-treating. I still think I might have been able to pretend it didn’t exist.

Then she was four. Four-year olds talk to other four-year olds. She started asking about Halloween, and so it was all over. No more pretending it didn’t exist. Bring on the cavities! 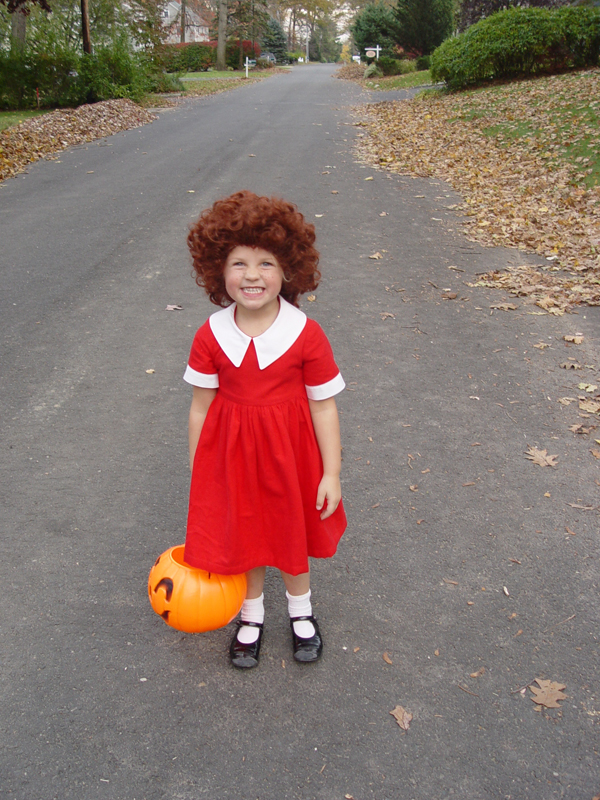 She wanted to be a princess, so I made her a beautiful Cinderalla costume. I bought shiny blue satin, sequins, tulle. It was quite magnificent. We gathered as a neighborhood, all of the little kids in their adorable costumes. It was 4:30pm, just before it would get dark (daylight savings time). As we were about to move as one big unit to knock on the first door, my daughter decided to run inside to change. CHANGE?! I totally acted cool because that’s what I was supposed to do. But seriously, I spent like 83 hours sewing her costume, gluing on sequins. I wanted to lecture my four year old, if you must know the truth. And badly. She came back down in some polyester piece of garbage from Toys-R-us. Whatever! Lesson learned. Spend minimal time on costumes, and leave it until the last minute.

{Photo above of my second daughter wearing the “Annie” costume that I made. This child was not as opinionated, so it stayed on!} 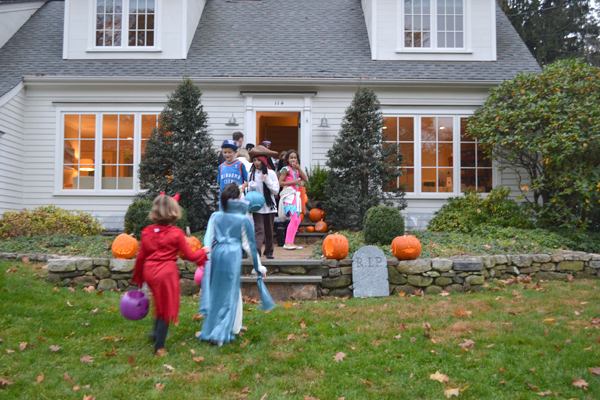 I should say here that Halloweens in our neighborhood are epic. Picture a cul-de-sac with houses close together in the center of town. It is a mecca for all of the people outside of town with their four acre properties and no neighbors. Without exaggerating one bit, we have about 450 kids come knocking on our door each year. (Now you might understand my need to flee those first few years.)

Each year after that Cinderella fiasco, I learned to embrace Halloween more and more. How could we not? We would make it a party with beer, wine, hot toddies, chili, pumpkin muffins, crafts. And TONS of candy. So much candy that I just had to let go and accept the fact that I would not be able to control my kids. I didn’t know what they were eating because most of the time I didn’t know where they were!

Some years the costumes were made (bubble gum machine, Annie), some years they were slapped together the hour before (worker guy, cowboy, mini me), but more and more they became store bought. I embraced this, too. Less work for me! And another addition to the dress-up closet, which was becoming legendary.

Even my husband and I dressed up from time to time. Bjorn Borg and Billy Jean King, if you’re wondering. 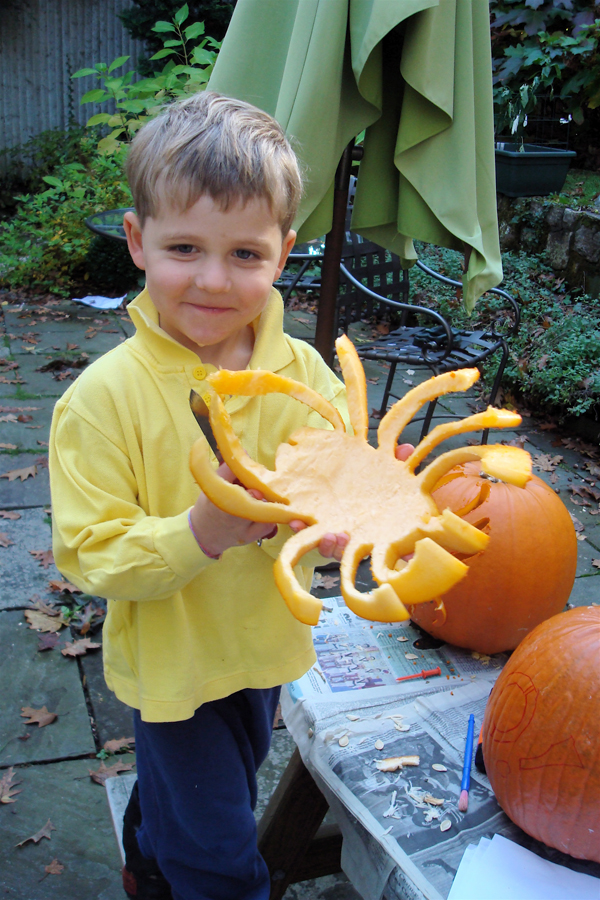 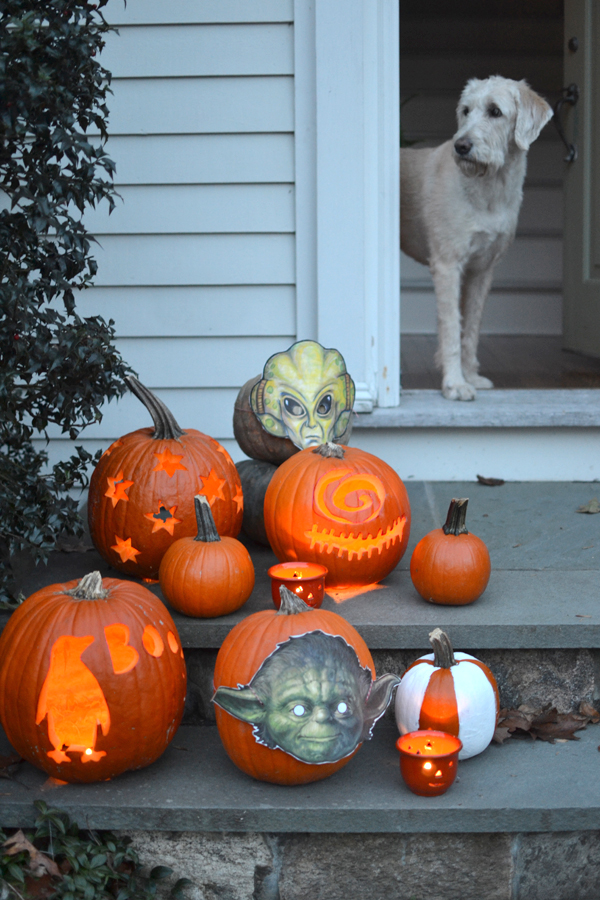 Pumpkin carving became a family affair, and every year I felt the need to out-do myself. Our house was becoming known for the artistic pumpkins. With 450 people each year, the word was out. 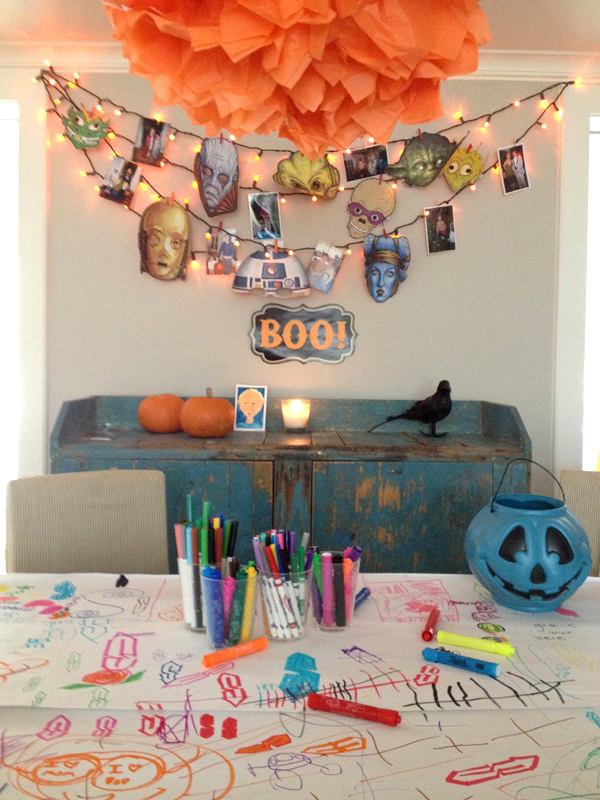 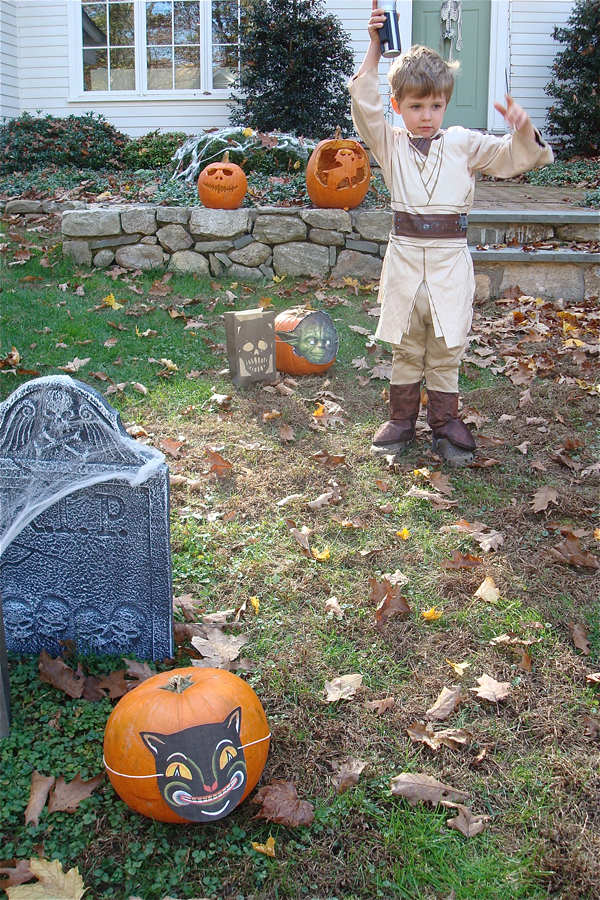 I scoured the internet for the best vintage decorations. I went with a Star Wars theme one year which we used over and over again for, like, five years. Star wars stayed around for a loooong time. (How cute is little Han Solo?)

So here is the clincher: We moved. We no longer live on the most famous street in town. We now live in a house that has no neighbors. It’s a rented house that has only one outside light. It’s old, very old. It’s actually….well, kind of creepy. The perfect house for Halloween.

If I’ve learned anything over these fast thirteen years it’s that KIDS LOVE HALLOWEEN!!! My own three would be heartbroken if that box stayed in the attic. They never want to stop being a kid, they want to dress up forever and eat candy like there is no tomorrow. How can I end this now?

I have not decorated yet. But I will. I will do it while they are in school. I’ll surprise them. I will buy candy and put it in a big basket, even though we won’t have anyone come knocking. I’ll fill the house with the smells of apple cider and chili. I think this year it will be more important than ever to keep the traditions alive.

I wonder if nostalgia will drive me to decorate even after the kids have moved out? It’s ironic that my least favorite holiday might some day be the one I can’t let go of. Or at least, the one that will fill me with the most happy memories.

In truth, Halloween lives on as the best holiday because of one reason: the photos! Every year there is that one photo that tells a thousand words. The pacifier in my sons mouth, the snow on the ground, the two lost teeth, the year Halloween was canceled! It’s impossible to look at Halloween photos and not smile.

Time to go to the attic.

PS: To find out what my kids will be wearing, or if I stay true to my promise to decorate this creepy, old house, follow me on Instagram. My other happy place.