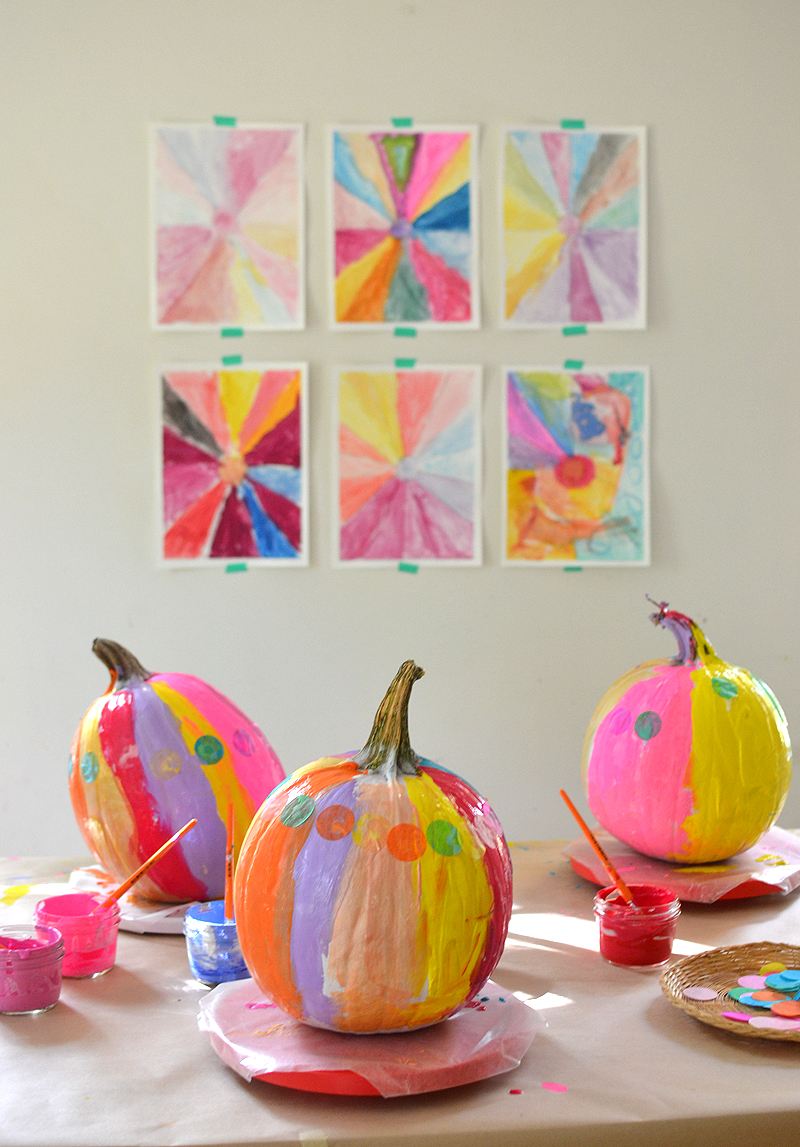 I have been waiting a year to post this!! The kids actually painted these pumpkins last year in art class, but I was too busy writing my book to edit the photos. And then all of a sudden the Holidays were here. But now…here they are! Aren’t they so gorgeous?

I used this one trick which I will tell you about in a second to get the colors really bright. And then I brought out one extra element at the end. 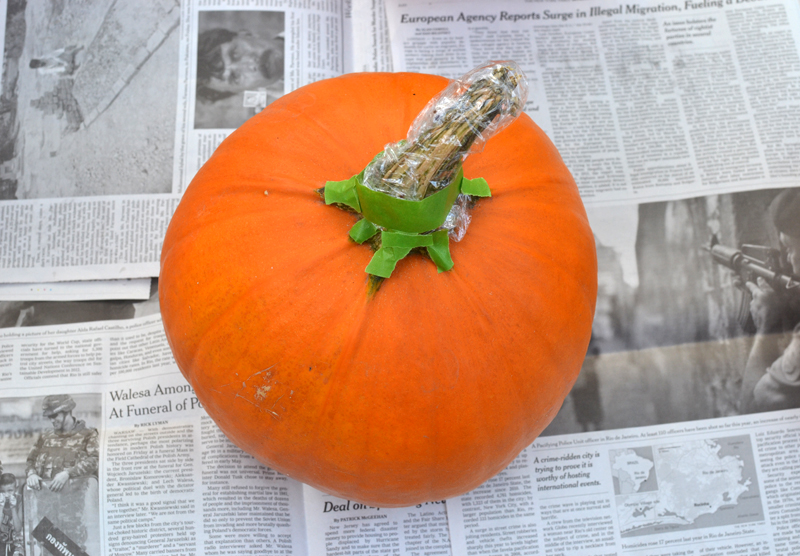 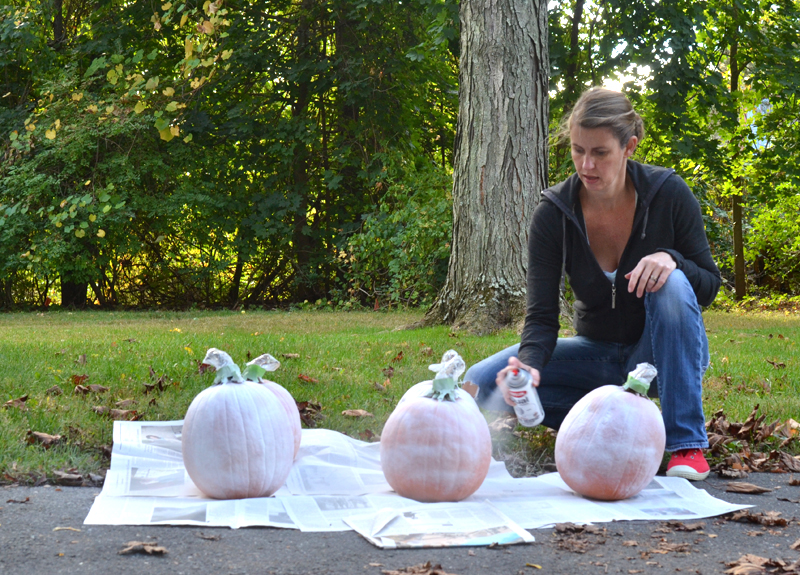 Ok, so the trick is quite obvious now. Spray paint them white! I first covered the stems as best I could, then I used this spray paint and gave them a good spray. 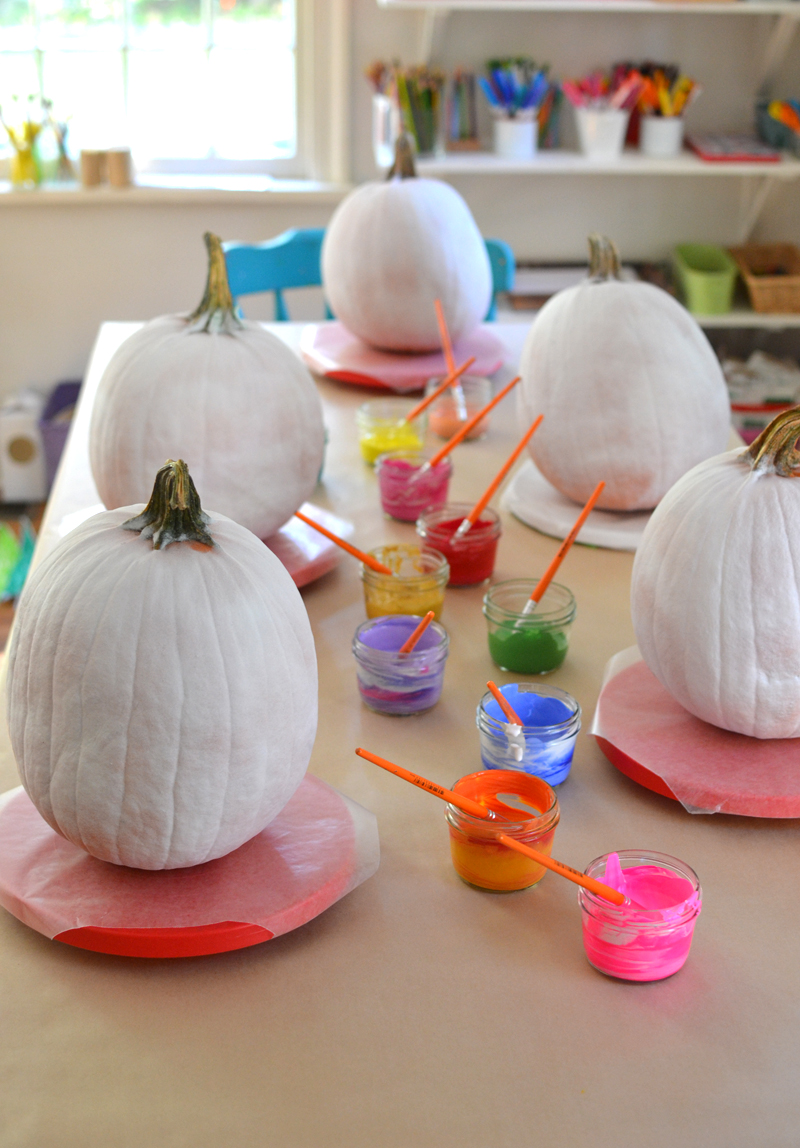 Tah-da! White pumpkins. Easy peasy. I put them on lazy-susans so the kids could paint all around a little easier without getting their hands all messy. Here is what you’ll need…

~ Lazy susans (totally optional but helps so much)

~ Brushes and jars for the paints 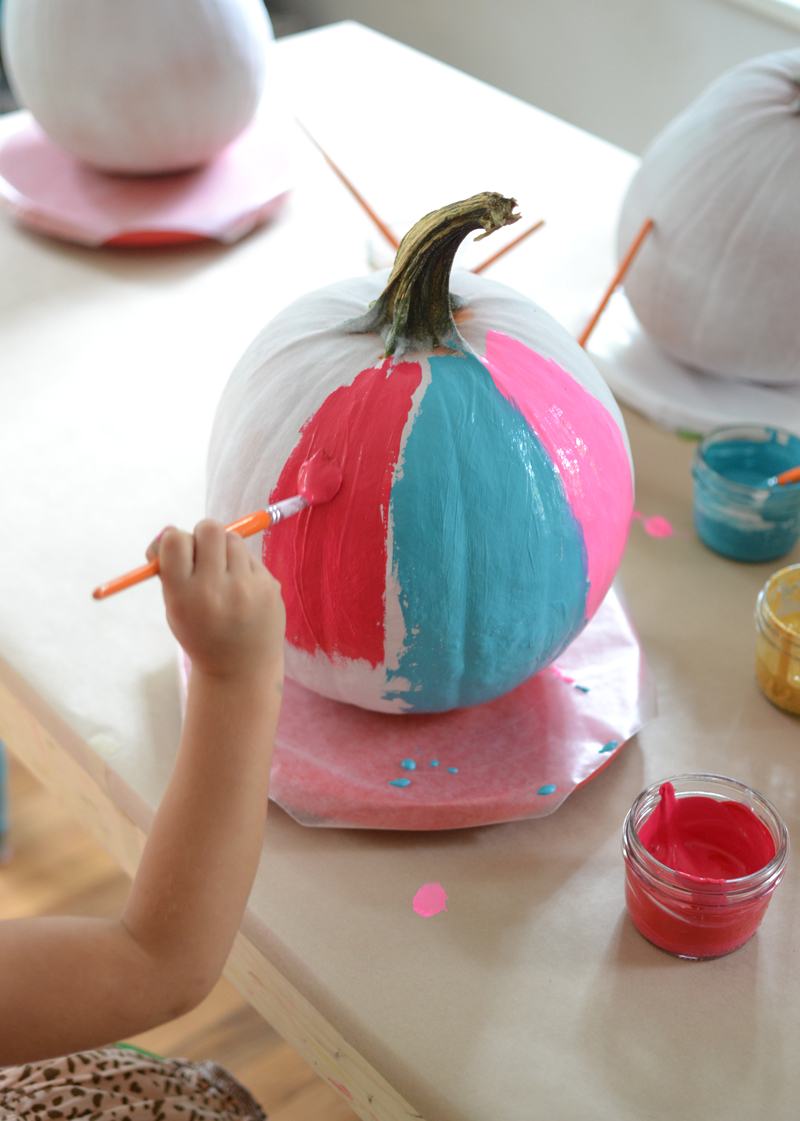 ~  Well this is an easy one. Just paint! The kids all automatically painted stripes, I think just following the stripes on the pumpkins. 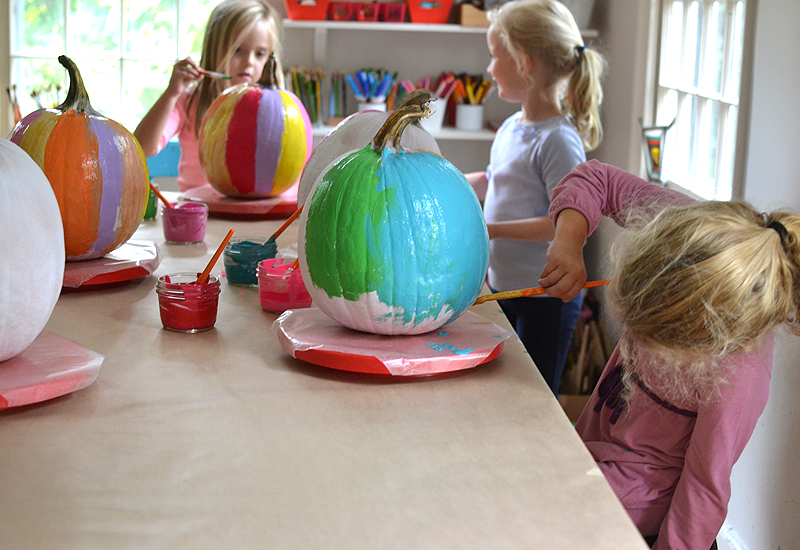 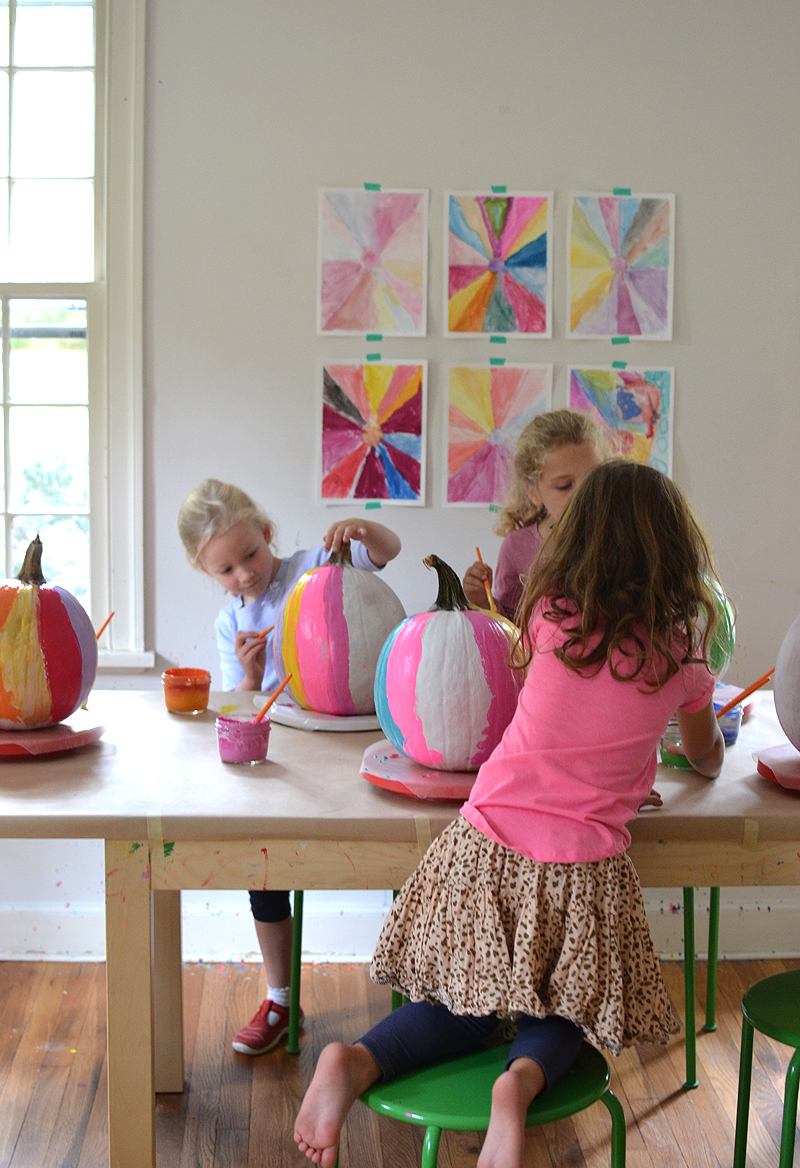 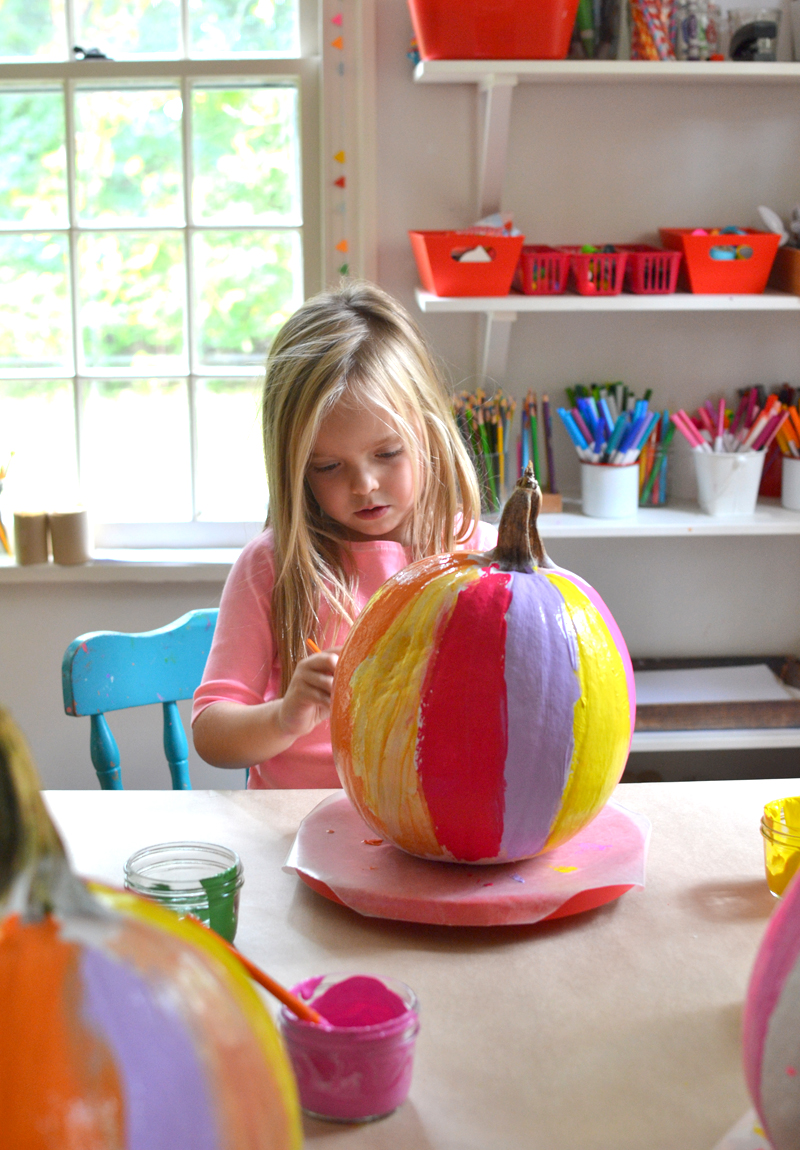 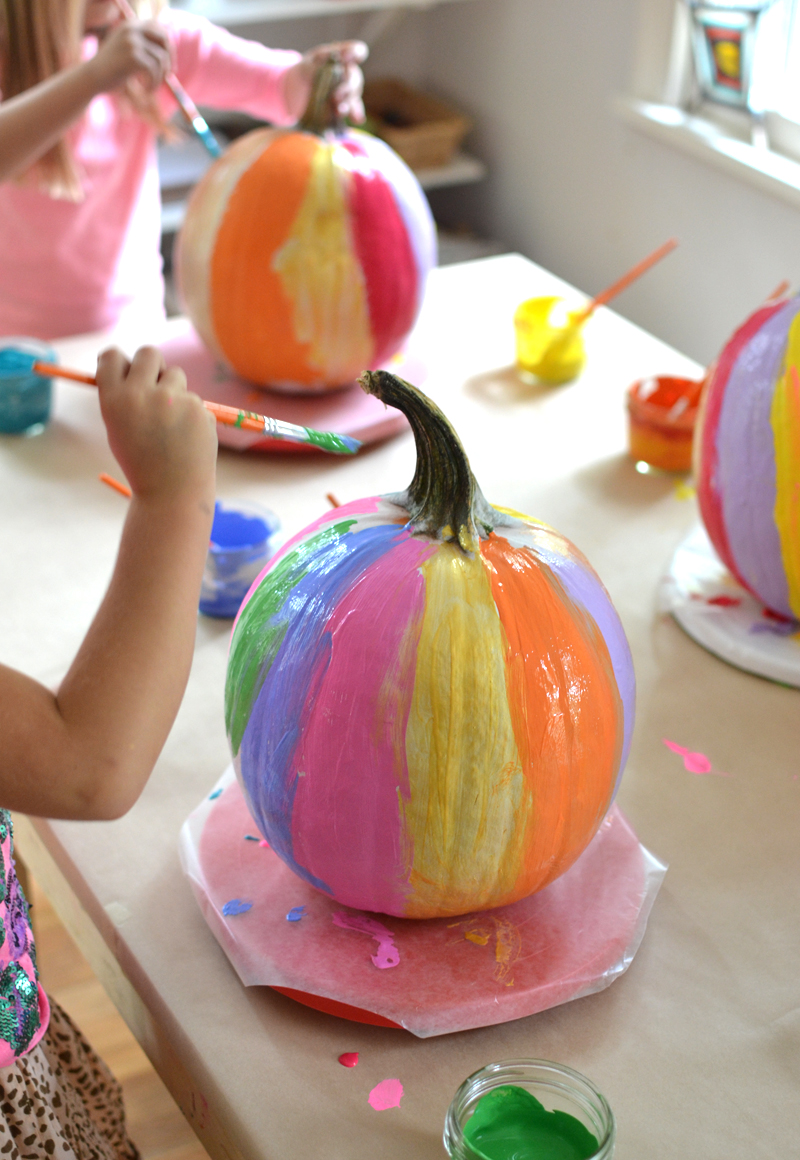 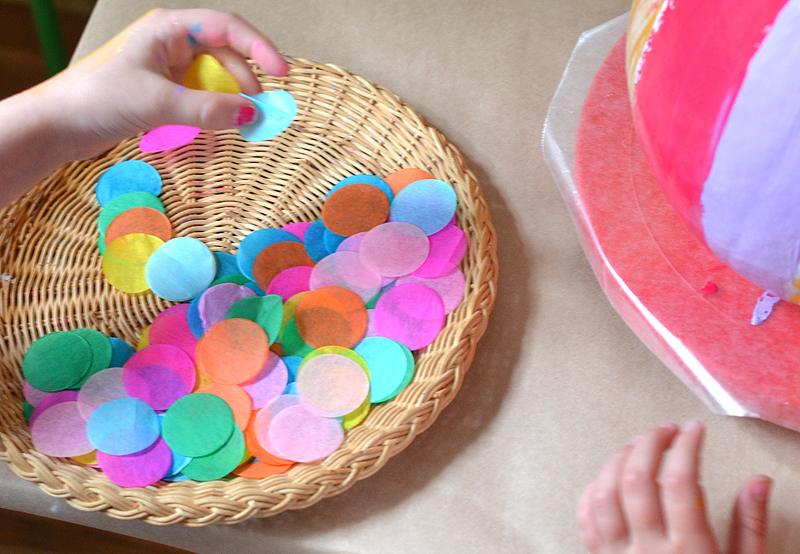 ~ When they finished painting, I brought out the tissue dots and some glue. I imagined dots all over the pumpkins, but they all just did one line around the middle. This group usually doesn’t copy each other, so I think it was just the natural thing to do. I did suggest putting on more dots, but after 45 minutes of working on their pumpkins, they were done. 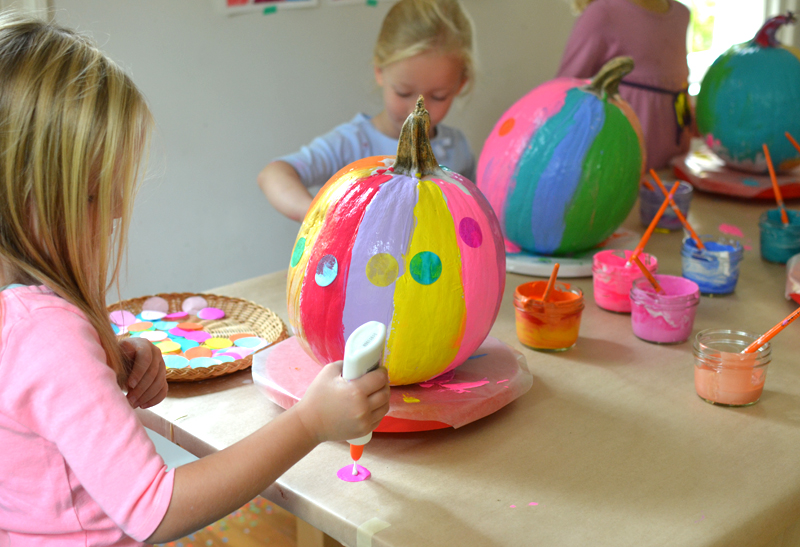 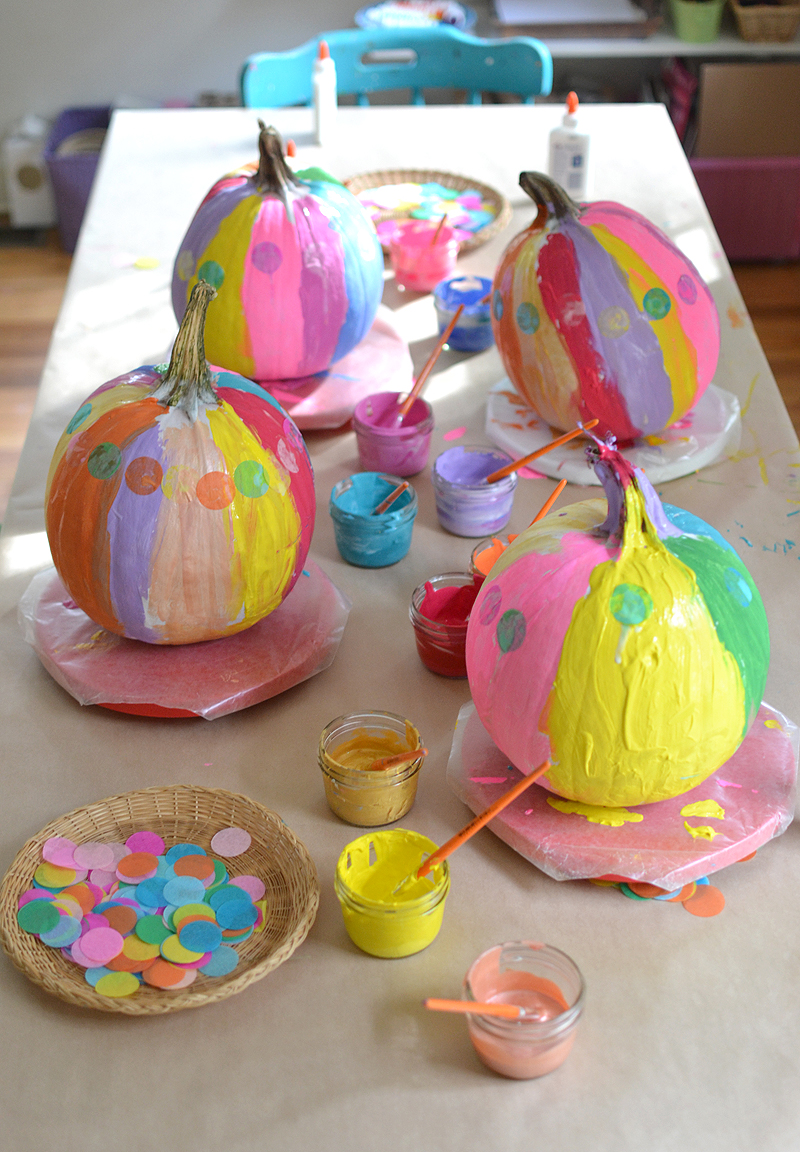 I so very badly wanted to keep them all. And in fact, I did get to keep them for a few days until they dried, but then the parents came back and picked them up. I think this year I will do it again with my own kids so we can keep them! 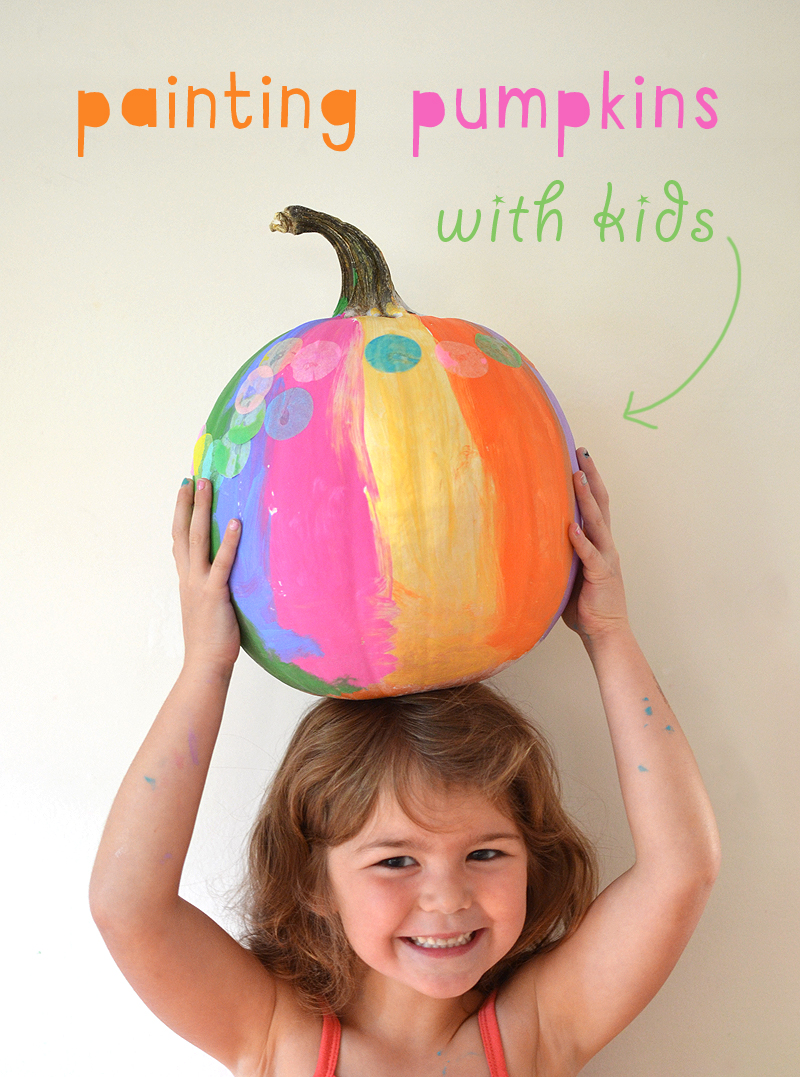 And how cute is this smiling face with the pumpkin on her head? Happy to bring her masterpiece home.

I brought smaller pumpkins to a birthday party recently and it was a huge hit! Make sure to supply cardboard for parents to carry the pumpkin home in the car, as they may still be a little wet with paint at pick-up. 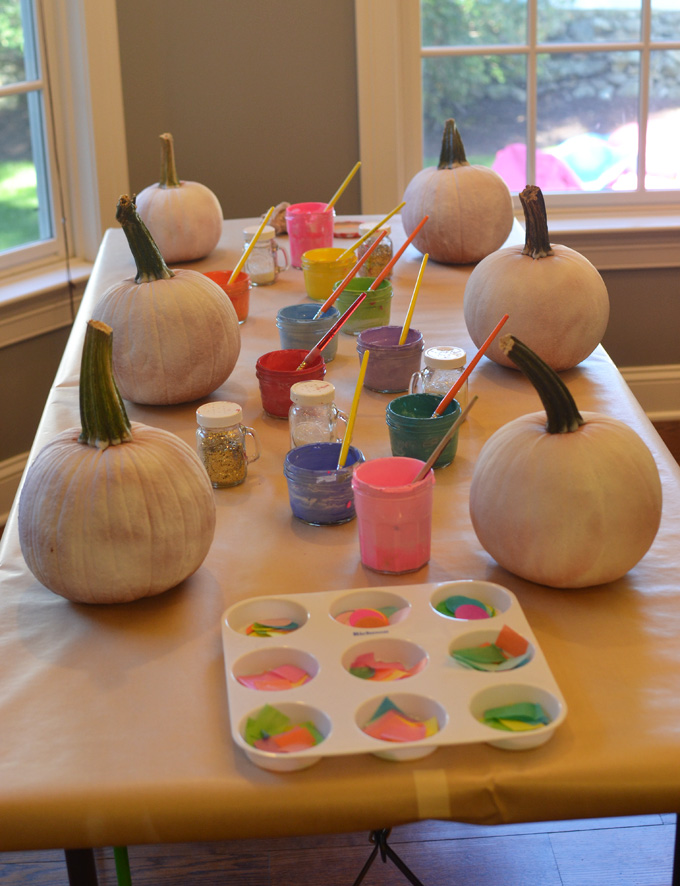 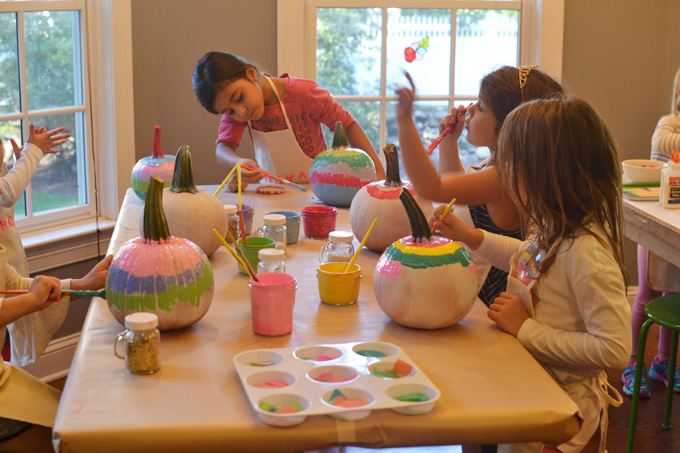 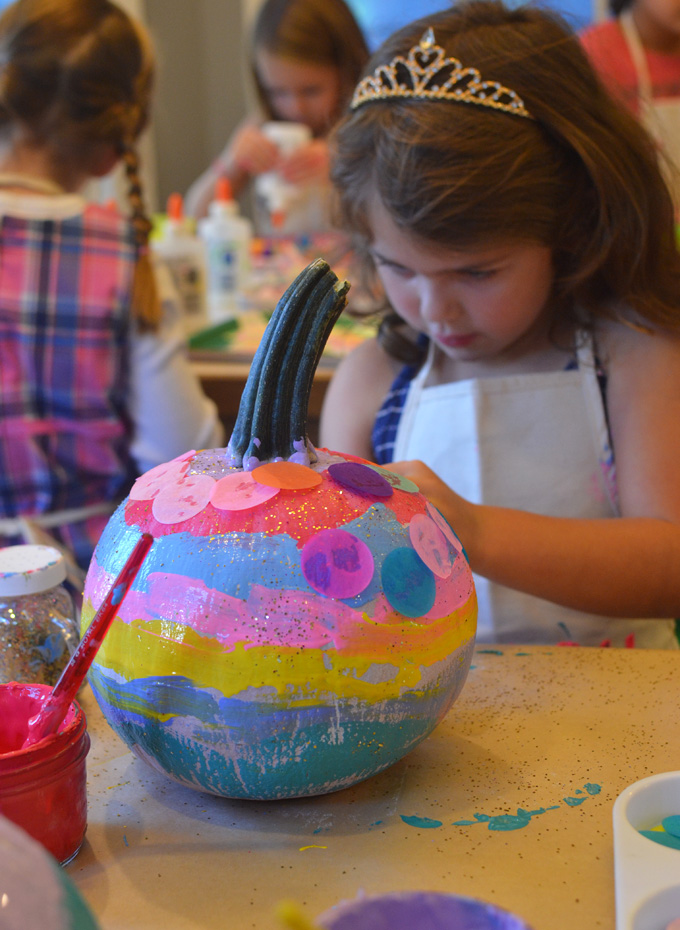 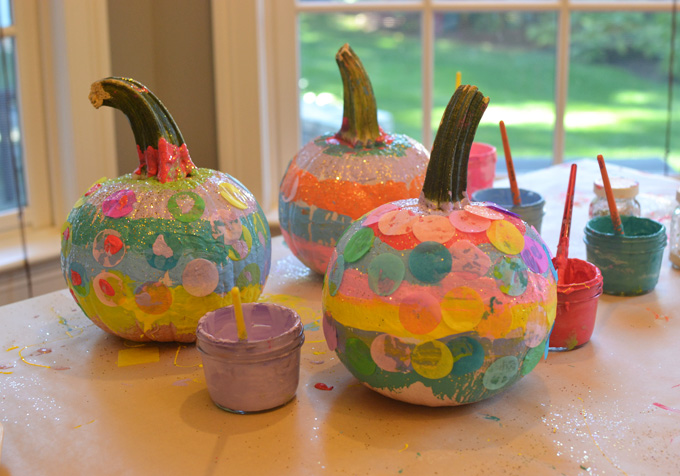 One thing I didn’t do, which I think would be a good idea in the future, is to cover them in Mod Podge after they have dried. It would give them a nice sheen. You can’t do this with the birthday party pumpkins, but you can if you have an art class and the kids can pick the pumpkins up the next day. 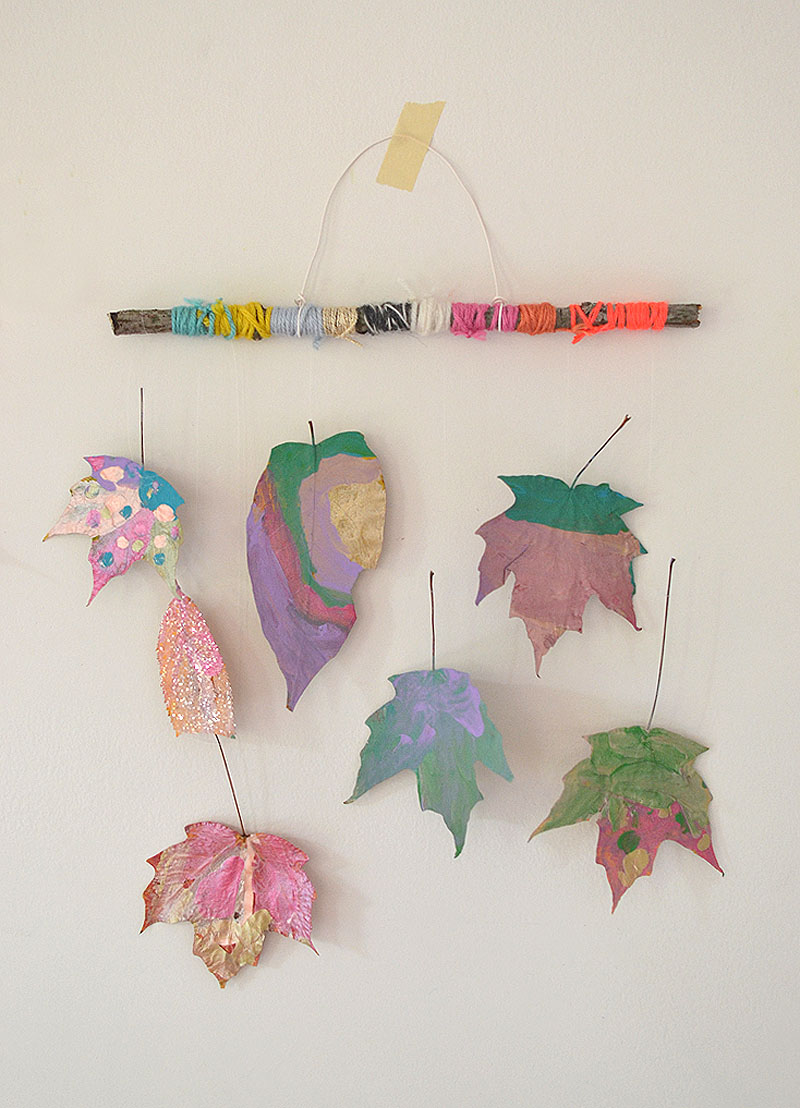 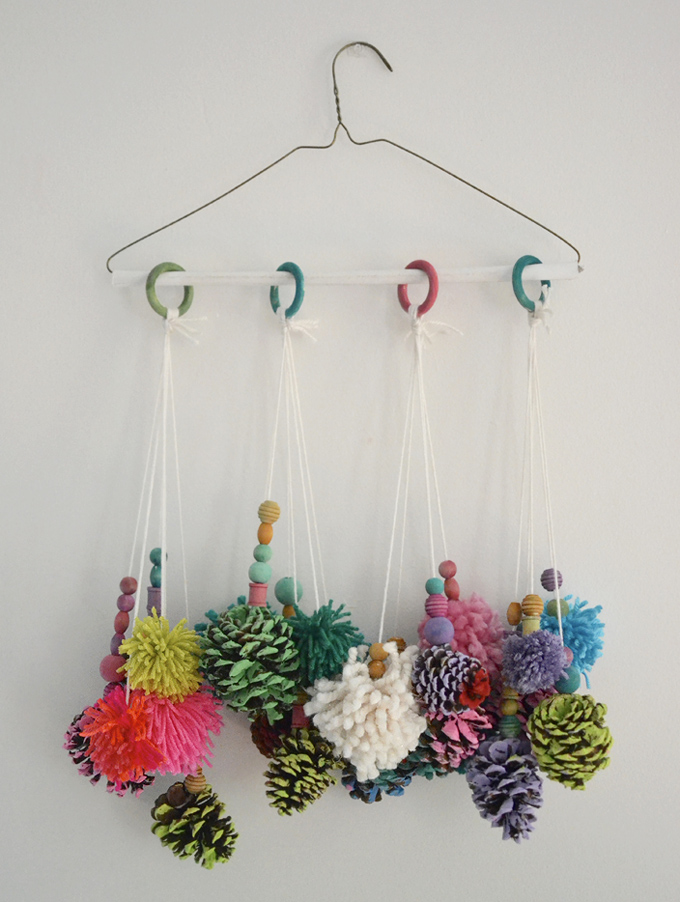 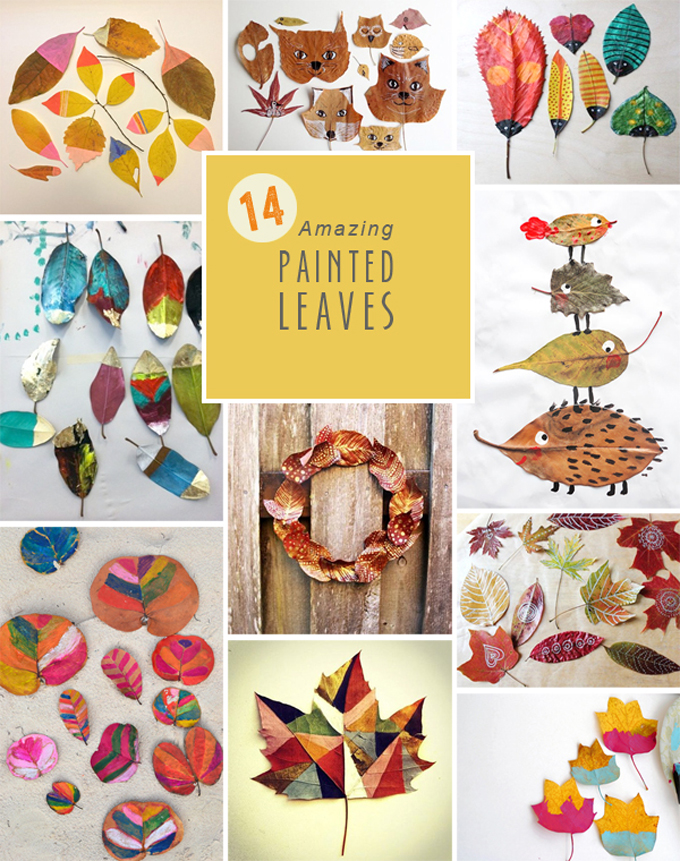 Previous Post: « It’s Finally Here…. Meet My Book!
Next Post: Tracing is Fun and There Are Benefits! » 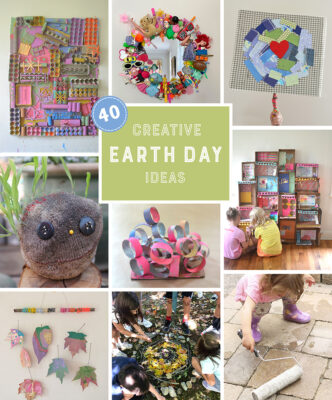